The preparations for the upcoming edition of European Work in Progress Cologne, hosted by AG Verleih, the association of German independent distributors, and supported by the Film- und Medienstiftung NRW, one of Germany’s leading film funding institutions, are in full swing.

At the Marché du Film in Cannes we have met with international producers, distributors, sales agents as well as festival programmers and numerous others. Thank you for all the great encounters and the wide range of interesting projects that were brought to our attention. Now
we are also excited to hear about your current films!

Eligible are projects that will have shot material available to present to the attending group of experienced professionals at the time of our event taking place from October 14 to 16, 2019 at the Filmforum during the Film Festival Cologne (Oct. 10-17, 2019).

For the first time, the selection committee of EWIP will also consider feature length documentary films when choosing up to 25 high-quality projects, whereas the focus will remain on narrative films.

A renowned jury will acknowledge the winners of the best pitches with awards including post-production services worth 50,000 € provided by our partners K13 and Éclair. 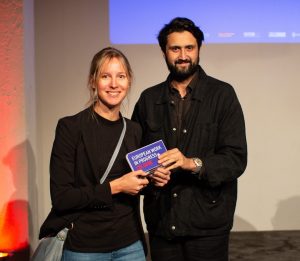 For the winner of our main award, END OF SEASON directed by Elmar Imanov and produced by Eva Blondiau (Color of May, Producer on the Move 2019), the timing could not have been more ideal: a post-production prize in the final phase, a closed deal with Pluto Film just before world-premiering at the International Film Festival Rotterdam in January where it received the FIPRESCI-Award!

For the last edition more than 100 feature film projects involving 49 countries world-wide had reached us and 200 industry delegates from 33 countries attended the event.

European Work in Progress Cologne will be accompanied by various panel discussions in cooperation with Creative Europe Desk Germany and EAVE.

For the online submission form follow the link here …

Please feel free to contact us if you have any questions. We are looking forward to hearing from you!